Nobody paid $7 to hear Homer read The Odyssey, or lined up to buy Thomas Malory's 15th-century version of King Arthur's legend. But, when Star Wars Episode 1: The Phantom Menace opens at 12:01 a.m. Wednesday, George Lucas' epic of galactic good and evil will be seen by more people in one day than Homer or Malory ever dreamed of reaching in their lifetimes.

Different eras, different heroes, yet Lucas' film series contains the same mythic qualities those ancient storytellers and others used to fuel imaginations throughout the ages.

Lucas always claimed that his lucrative Star Wars saga blends mythology and technology. Instead of a Scylla, he has Darth Vader. Luke Skywalker and Thor have more in common than you may think.

Indeed, Lucas' fascination with mythology led to an enduring friendship with the late Joseph Campbell, perhaps the best-known expert in the field.

Lucas blended archetypes of legends and visionary cinema into three Star Wars chapters between 1977 and 1983. Star Wars (known to Jedi disciples as A New Hope), The Empire Strikes Back and Return of the Jedi have grossed billions of dollars in worldwide ticket sales and merchandising.

The reason goes beyond state-of-the-art special effects and studio hype. Lucas' film series isn't merely a hit, it's a myth.

"Star Wars is an example of what Joseph Campbell called the Monomyth, which reaches a broader audience and is more enduring," said Shanti Fader, editor of Parabola magazine, a publication of the Society for the Study of Myth and Tradition.

Campbell -- known to mass audiences through The Power of Myth, the PBS TV series based on his books -- was an expert in the construction and cultural resonance of mythology. His books Masks of God and The Hero with a Thousand Faces are considered the ultimate guides to what has enthralled the world for centuries.

Campbell defined the Hero Cycle, a course of events that occurs as a rite of initiation in every myth, pinpointing the need for mentors, villains, elixirs and jesters along the way. Each step can be traced in the adventures of Star Wars hero Luke Skywalker.

Before Campbell died in 1987, the scholar and Lucas became friends. A storyteller needs a mentor as much as a hero does.

"Yes, I consider him a mentor," Lucas said at a recent New York press conference. "He was an amazing scholar and an amazing person. When I started doing Star Wars, I re-read Hero with a Thousand Faces. After Return of the Jedi, somebody gave me a tape of one of his lectures. I was just blown away by that. He was much more powerful as a speaker than he was as a writer."

A short time later, Lucas loaned his studios to PBS to produce the Campbell series. Letters and gifts exchanged by the two visionaries are on display in the Joseph Campbell Archives in Santa Barbara, Calif.

The founding curator of that museum, Dr. Jonathan Young, said Campbell compared Lucas to the masters.

"Campbell was very grateful that Lucas presented the elements of Luke's initiation so clearly," Young said. "The idea of a calling, of being drawn away into a place of wisdom, finding allies and mentors, accomplishing the ordeals, and then returning."

In Campbell's teachings, myths inspire both awe and recognition. They communicate a sense of universal order and show how people should live.

"Campbell was impressed that Lucas had so diligently presented this large mystery in a way that was so accessible to large numbers of people," Young said.

The Hero and the Quest

"Luke fulfills a number of the characteristics that you see in mythic heroes," Feder said: "A royal lineage that he grows up ignorant about in a simple, obscure way, and he has special powers and abilities that are brought out by a series of teachers. In classic mythology, the hero reluctantly leaves the homeland (in Luke's case, the planet Tatooine) on a quest that takes him over a supernatural threshold into a strange land. A helper/co-hero such as space jockey Han Solo lends a steady hand through a series of ordeals. Comic relief is provided by tricksters such as the Greek muse Thalia or C3PO and R2-D2.

Ultimately, the hero must stand on his own, face the darkness and conquer it before returning to reality, stronger and wiser. 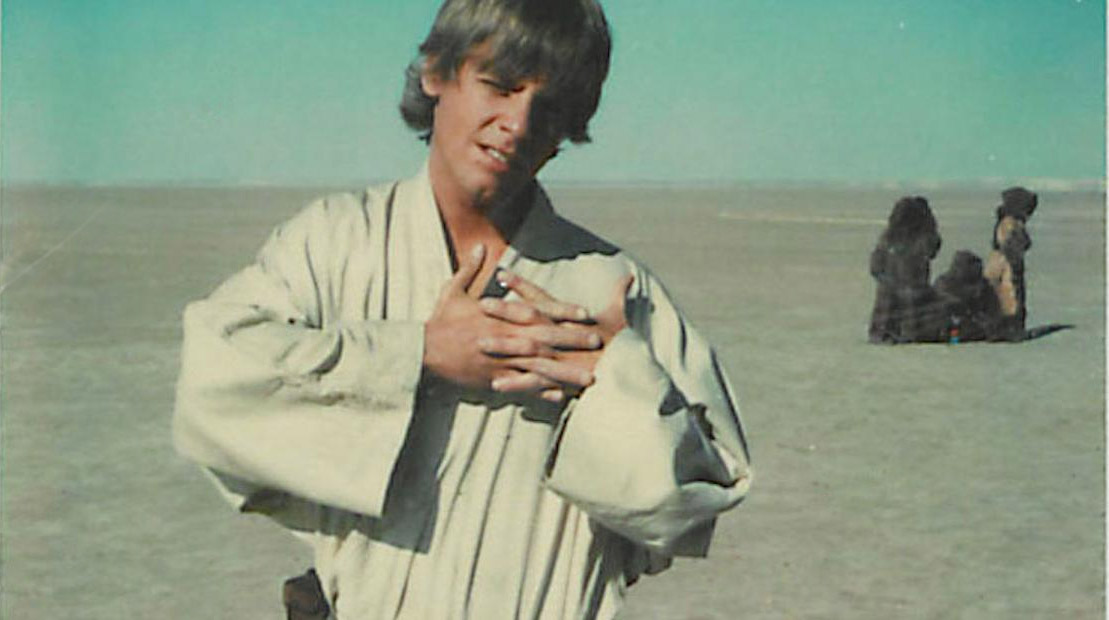 For Luke, the darkness was the evil side of the Force, a cosmic spiritualism that Obi-Wan Kenobi and Yoda taught him to harness for good purposes, another element of the Hero Cycle. Luke and Han, by association with the Force, both evolve from self-centered people into crusaders with a grand purpose.

"No one becomes much in this life without powerful mentoring experiences," Young said. "These are both universal and precious. It is a rare and beautiful thing that everyone knows on some level is of great, great value."

A series of obstacles must block the hero's path to an enchanted land where final victory -- the elixir of a golden fleece or galactic peace -- awaits. Threshold guardians constantly interfere with the hero, whether it's the terror of Medusa, Mordred, or the Empire's stormtroopers and a conniving Jabba the Hutt.

Even after defeating the guardians, mythological heroes can't breathe easily.

"The seeker has to go through a death and rebirth experience," Young said. "When Luke is trapped in the garbage dump in the first movie, or Han Solo is turned to stone in that carbonite block, these are experiences equal to Jonah being swallowed by the great fish."

"They are being completely overwhelmed by defeat, a near-death experience, and then they're revived and are able to become new people. That's a challenge that every human being goes through."

After the hero prevails, the final showdown with the villain, either real or psychological, can begin. Psychologist Carl Jung, a mentor of sorts to Campbell, called this antagonist the Shadow archetype. Darth Vader's black cloak and helmet, or his estranged conflict with his son certainly fit that description.

"Every culture has them, and they're essentially the same story," said Liam Neeson, who plays Jedi master Qui-Gon Jinn in The Phantom Menace. "We immediately recognize them in some way, and we feel the need to have them told."

"We're living in such a complex world, with so much confusion each time we turn around, that we want to see something that makes the world more palatable. (Myths) just remind you of those basic pillars of wisdom that everybody should have."

The most obvious is the massive exposure and instantaneous cult of devotion that surrounds The Phantom Menace. Lucas is the first mass media mythologist, which causes some academics to question placing him among the elite creators of legends. Ancient myths thrived on the power of their stories alone, not mass communication "There is the test-of-time thing to consider," Feder said. "A lot of people would hesitate to put the label of 'myth' on something relatively new like Star Wars. But, a myth is a myth, no matter what trappings we put on it. Give them light sabers instead of swords and it doesn't matter."

Feder also noted Luke's shift toward pacifism, which is different from past mythological heroes. Yoda and Obi-Wan teach Luke to use the Force for knowledge and defense, and the young Jedi knight tosses away his weapon during the climactic battle with Darth Vader in Return of the Jedi.

"That's a pretty radical idea," she said. "We're used to the hero fighting; slaying the dragon or killing the monster. That's what we find most familiar. This idea of triumphing by not fighting, of being passive, of letting this power work through you, is a very Zen type of idea."

The most intriguing twists on mythological convention are just starting to take shape with the release of The Phantom Menace. By moving backward in time and focusing on 9-year-old Anakin Skywalker, who will mature into Darth Vader, Lucas may be creating a larger, more shadowy multi-film epic. If so, Luke's story may be one portion of a larger vision.

It may turn out that Anakin is the ultimate hero, and his Darth Vader identity is merely the low point he endures on the trail of a finer elixir. A rumor dating back to 1977 that Lucas would create nine Star Wars films has since been denied. However, with The Phantom Menace beginning with Anakin's childhood and chapter six, Return of the Jedi, ending with his immortality, Anakin's Hero Cycle could logically be completed in six films.

Concentrating on Anakin Skywalker is a daring position to take, according to Young, who read The Phantom Menace screenplay while it was being produced.

"In each of the four films, Lucas has been willing to take on darker themes, what Jung would call 'shadow material,' " Young said. "We know Anakin Skywalker will someday be Darth Vader. Here's this very charming 9-year-old boy that we're following, and we know where he's going."

"It casts this troubled quality across the whole story, which I think is fascinating for a large-scale movie or any myth."

By revealing Darth Vader's redemption from the dark side of the Force in Return of the Jedi, Lucas has already informed audiences that there is light after the shadows. It's that promise of goodness that Feder believes is vital to the Star Wars phenomenon and Lucas' place among the master mythmakers.

"For all that we like our gritty stories and our dark, brooding anti-heroes, how many of those gritty stories have endured?" she asked. "People may not realize it on the surface, but (the Star Wars story) touches something inside us in a way that mere entertainment doesn't."